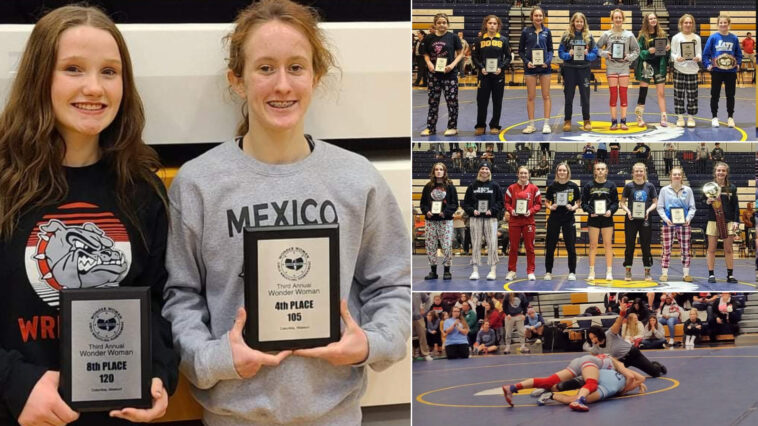 After Day 1, the Lady Bulldogs had only two competitors left standing, Katherine Bowen and Abbigale Drew.  Drew would face elimination right out of the gate as she was on the consolation side of the bracket, whereas Bowen would be able to wait for one round before her semi-final matchup.

Abbigale started off strong against her opponent from Platte County.  She scored first with a takedown.  But then it was a back and forth period with each wrestler scoring reversals but Drew scored a last-second takedown to take a 6-5 lead going into the 2nd period.  Drew chose down and quickly got out.  She would then waste no time scoring another takedown and her opponent to their back to secure the fall.

Abbigale’s blood round would be against an opponent Mexico is familiar with, Southern Boone.  This particular matchup would end up being a high-scoring affair with Drew scoring nine takedowns, one set of nearfall, and an escape.  All the while allowing only ten escape points.  With this win, she’d be guaranteed to medal at this event.

Her first round of placement match would be against a District Tournament opponent from Washington (Bliss).  Bliss was ranked 4th in the state going into the tournament.  It was a struggle for Drew from the get-go. Her opponent took her down quickly to her back.  Drew was able to roll through one but would end up getting pinned with fourteen seconds left in the first period.