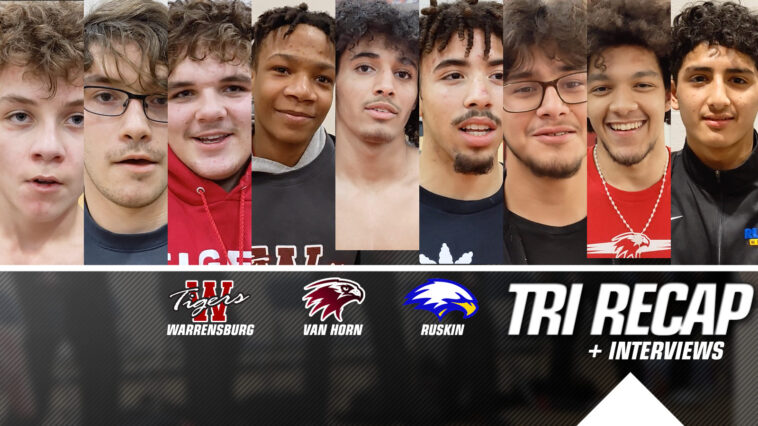 It all came down to one match.

Warrensburg and Van Horn were tied at 32 going into the final match at 106 pounds.

The Tigers’ Dayton Dunn took on Emoyi Mlondani in a match that would decide the dual. Dunn dominated the match, jumping out to a 7-3 lead before hooking in a cradle to get the pin in the second period, giving his team a 38-32 victory Thursday at Van Horn High School.

The team also defeated 48-18 during the tri dual to finish off a two-win day. And it was Dunn’s big victory that powered the Tigers.

“I just wrestled with aggression and when I saw an opening, I just went for it,” Dunn said. “I did really good on my sweep singles and shooting as fast as I can.”

Dunn was one of five Warrensburg grapplers to finish the day 5-0. His other victory came by a forfeit against Ruskin.

Isaiah Williams (215) earned another big win in a pivotal matchup against Van Horn. He got a takedown late in the third period to break a 7-7 deadlock and take a 9-7 victory against Jaylen Mitchell. He also pinned Ruskin’s Israel Gray in the first dual.

“By the first round, he was gassed,” Williams said of his match with Mitchell. “He was breathing hard.

“My tilts were good and my headlocks could have been better on my rolls.”