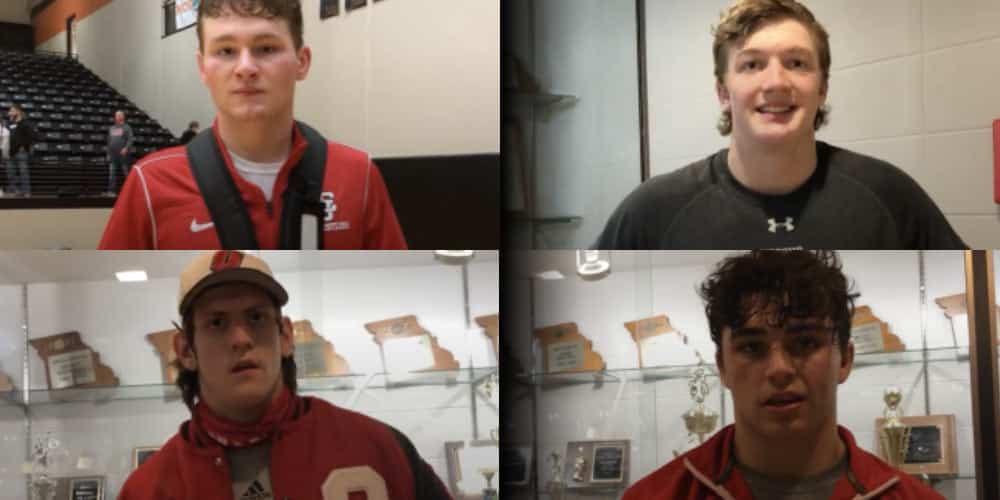 The dominance of Neosho wrestling in the Central Ozark Conference continued for another year after Saturday’s championships at Republic High School.

The Wildcats had wrestlers in the finals or third-place match in 11 of the 14 classes and won titles in five of the eight championship matches.

That depth across the weight classes helped Neosho win their ninth straight COC title and 12th out of the past 13 years — the exception came in 2012 when they finished second behind Ozark.

“The thing about our conference, it is much improved, we got some quality kids in this conference,” Neosho coach Jeremy Phillips. “We have quality teams too. We had tough duals with Ozark and Nixa. I told the kids it won’t be a walk in the park, we have to come in here and be prepared to fight and battle and do so as a team or these guys will come take it from us.”

The championship run usually parlayed with success at the state level for the Wildcats, who have won seven of the past eight Class 3 titles and the past two.

Ozark and Nixa each won three championships, while Willard, Carthage and Carl Junction accounted for the other winners.

Neosho opened the title run in the lowest weight class as Joseph Hembree (106 pounds) who avenged a loss to Carl Junction’s Lukas Walker by pinning him at the 2:56. The two met in a dual on Thursday and Walker, ranked No. 5 in the weight class by MissouriWrestling.com, beat the third-ranked Hembree, 4-0.

“I went a little better stance and I when I went for my sweeps, I didn’t miss,” Hembree said.

Earlier in the day, Hembree (35-5) beat No. 6-ranked Noah Agcoaili of Willard by a pin in 52 seconds. Agcoaili improved to 37-7 with a win in the third-place match.

At 145 pounds, Neosho’s Eli Zar pinned Carthage’s Davion King by a pin at 3:05. Zar held a 6-4 lead at the time of the win and beat a fourth opponent on the day with a winning record as King fell to 32-5 with the setback.

Neosho’s Jeremiah Larson got a pin against Jacob Ott of Webb City at 1:24 in a battle of ranked wrestlers. Larson, ranked No. 1 one at 195, steadily built a big lead against Ott, holding a 7-1 lead at the time against Ott – ranked No. 3 – and improved to 36-0 on the year. All of Larson’s wins came by first-period pins.

Neosho’s Hayden Crane, a junior, got a late takedown against Ozark’s Elijah Maskrod to force overtime in the 132 title match Then, Crane got a takedown to win it, improving to 31-9.

“I had to still come back and win in overtime,” Crane said. “I knew it was all up to me. I couldn’t leave it in the ref’s hand. I had to come back and ultimately it was up if I wanted to go do it or not.”

No. 1-ranked Cayden Auch improved to 40-0 on the year thanks to a 5-0 day that featured five pins for the Neosho standout.

In the finals, the three-time state champion faced off against Willard’s Ryder Heimbach, ranked No. 6 in 160 in Class 3. Auch, ranked No. 1, dominated the match by building an 11-3 lead before getting a pin at 3:13. All three of the points Heimbach got was when Auch let him up trying to get another takedown.

“It is exciting but it is not the ultimate goal, so you can’t get too excited about it,” the Arkansas-Little Rock signee said of winning the COC title again. “I had wrestled him earlier this season and we knew the best way to beat him was to take him down and let him up and try to break him and get in his head mentally and then finish the job after that. That is what we did.”

Auch got pins in the first period in his first four matches before needing to go to the second against Heimbach (36-7).

Neosho will be idle until the district tournament on Feb. 13 and of the three losses in the finals came to Class 4 schools and none of those opponents will be there at the Class 3 District 6 meet in Carl Junction.

“It is a learning opportunity,” Phillips said of some losses in the first- and third-place matches. “A stepping stone to bigger and better things. If we don’t learn and our growth is done and we can’t be done. We have to continue to grow if we want to do something special the next three tournaments.”

Two of Nixa’s championships came early on with Zan Fugitt (113) and Peyton Moore (120).

Fugitt, ranked No. 1 in Class 4, had three pins, a medical forfeit and closed his day with a 16-0 tech fall over Carthage’s Bradyn Tate in the championship, 16-0, early in the third period.

“It is good to add another,” Fugitt said of winning another COC title. “I like the chance to compete and mostly go out and get pins and points for the team score.”

Moore kept his perfect season intact with a 4-0 day that ended with a pin over Class 3 No. 5-ranked Landon Kivett of Neosho in 1:12. Moore (33-0) pinned his way to the title and three of the four happened in the first period.

“I haven’t been wrestling my best lately,” Moore said. “I saw Kivett earlier this year and pinned him the first period too. I was confident in wrestling him again. I’m sure he studied film and watched what I did but I try to change things up every once in a while.”

The final title for the Eagles went to John Gholson, who pinned Neosho’s Jacob Fry 30 seconds into the second period. Gholson (30-2) pinned all five of his opponents – including two in less than a minute.

“I wrestled him before and I didn’t get the pin but I did this time,” Gholson said. “It feels good to win; I came close last year (runner-up). This year, I was hungry, I really wanted it.”

Gholson made a move in weight classes after wrestling at 285 a few weeks ago and went head-to-head with Ozark’s Hunter Tennison.

Tennison stayed undefeated on the year to highlight the day for the Tigers. Joining him at the top of the podium was Clayton Moision (152) and Thomas Rushing (170).

Class 4 No. 4-ranked Tennison beat Branson’s Sam Wood twice during the day, pinning him in the first round of pool matches (1:48) and again in the finals (1:11).

“I am humbled,” said Tennison of repeating as champion. “This year my coaches have really pushed for conditioning and everything else. Just with every win, I take in because I know after this season it will be my last.”

Moison (12-1) capped his 4-0 day with a pin over Willard’s Timothy Stevens less than a minute into the second period. Stevens fell to 42-4 with the loss.

Rushing followed Moison by going 4-0 as well, pinning his first two foes and then winning by decisions against the last two. In the finals, Rushing (34-10) got a 9-4 decision over Neosho’s Eric Holt, ranked No. 2 in Class 3.

Perhaps the most competitive matchup came in the 182-pound finals as Carl Junction’s Jesse Cassatt won in overtime, 5-3, over Carthage’s Luke Gall.

It was the first matchup between the two this year, as Cassatt was at 195 pounds earlier this season when the two schools were at the same tournament. Then, the second matchup was set to happen but Carthage was quarantined.

Cassatt nearly got to takedown with 39 seconds left but the officials called Gall out of bounds and it did not count. Still facing a 3-2 deficit, Cassatt got a point with about 5 seconds to go when the official called Gall for stalling.

That forced overtime and Cassatt, the state champion last year, got a quick takedown for the win.

“It was pretty rough,” Carthage coach Kenny Brown said of the close loss. “We won’t agree with the stall call and Carl Junction will; it is what it is. It is a good match for us. We will see other kids just like him in the state tournament.”

Carthage got a championship from Eli Sneed, who pinned Willard’s Oscar Martinez in the second period to win his first championship after taking fifth and sixth in previous trips to the COC championships.

“He was a tough kid and very strong but I had to wrestle my match,” said Sneed of his first meeting against Martinez. “He liked to snap a lot and get me down in the front headlock position. I tried to use that against him to get to his legs and it worked out.”

The highest profile match came in the finals of 126 pounds between Willard’s Christian Finley and Branson’s Kyshin Isringhausen.

This was the third meeting between the two foes and Finley is now 2-1. He beat Isringhausen at the Monett Invitational last month by a medical forfeit. Isringhausen won the first meeting in the Neosho Invitational, picking up a 2-1 victory in the finals there.

Finley won his first three matches by pins and then had back-to-back 6-2 wins, starting with a win against Deagan Fugitt. Isringhausen had three pins before getting a 15-4 major decision against Jordan Hurst.

“It is always great to wrestle a ranked wrestler at the top,” Finley said. “It was a great match and I look forward to another one at sectionals with him.”