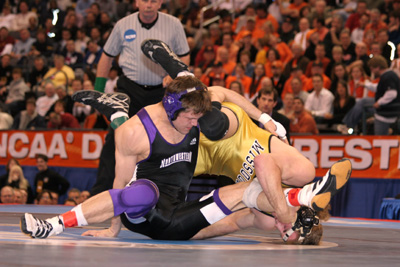 To my former wrestling enemy.

Let’s be honest, I didn’t like you and you didn’t like me. It wasn’t so much animosity as it was the mere fact that we served as obstacles to one another in the way of achieving gold medals. Let’s get this straight as well: When all was said and done I held more victories over you than you did over me, though the victories you took from me hurt. They were setbacks in my wrestling journey. At the time, I felt like the entire world was crumbling around me, and it was hard to identify any sense of redemption.

I hated wrestling you. It was always a mental game trying to prepare for each match. My mind would get carried away and the nerves wouldn’t cease from turning my stomach until the whistle blew and it was time to wrestle. A few times I defeated you decisively, enough for me to think that your confidence would dwindle. But it didn’t. Our next match, you came at me as hard as ever.

You were a dangerous competitor, and you knew it.

Quite frankly, I wanted to get rid of you.

But now, looking back, my perspective has changed. In fact, far from anything else, I want to thank you. It didn’t take long after my wrestling career had come to a close to realize what you had done for me. The truth is that I owe you a lot. To some degree, if it weren’t for you, I probably wouldn’t be who I am today. Your presence in my life, though seemingly negative at the time, taught me a great many things. For one, you taught me early on that life can be a battle. The constant battles between us were a metaphor for life. You can work hard and even come out victorious in any given situation, but that doesn’t mean it’s over. Sometimes, more battles are on the horizon and you need to work hard and plan accordingly.

You also taught me what it feels like to have a target on my back. You wanted to be the best, and you viewed me as someone in that category. So you went after me. And every time I defeated you, you kept coming back. As a result, you forced me in a situation in which I had to constantly deal with pressure. Even though it felt negative, it was actually good. And even as a kid, this kind of pressure was a good thing. I had to grow up fast as a result and learn to deal with the heavy, undesired weight of pressure.

I wasn’t necessarily the most mentally tough wrestler either, but you made me tough nonetheless. Avoiding a match with you was out of the question. So I had to be ready. I had to put everything I had on line…every time.

You taught me that success doesn’t come easy. Perhaps it was my human nature or another consequence of a lack of mental toughness, but I often hoped for an easy road toward the top of the podium. I wanted to be a champion. Gold medals were important to me. And you made “easy roads” nonexistent.

Perhaps the strongest lesson you taught me was that of persistence. I was often confused by your persistence and perhaps even more so by your unwavering confidence. No matter how many times I knocked you down, you kept getting back up. It has taken me a while to acknowledge this, but I admire you for that.

I’m not exactly sure what you think of me after all these years; but I want you to know that I’m grateful for you. You impacted my life for the better. Stepping on the mat with you time after time helped me grow as a competitor and as a person. I couldn’t see it at the time, but we were doing something extraordinary. You challenged me, and I know I challenged you.

Thank you for what you did. You were once my enemy, but I now consider you a distant friend.