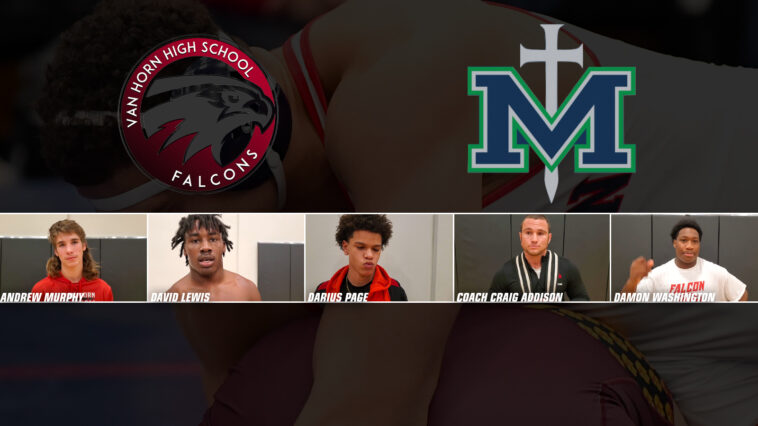 On Dec. 22, the Falcons fell to Blue Springs South 43-42 after losing the tiebreaker due to having more forfeits.

However, the team was missing nearly half of its starting varsity wrestlers along with head coach Craig Addison due to various reasons, including some being quarantined due to COVID19.

The holiday break gave those on the Falcons an opportunity to recover and they were at close to full strength against St. Michael The Archangel Catholic Monday at home. They looked like the dominant group it had for most of the year as Van Horn captured a 55-18 victory.

“It’s good to be wrestling again after having five kids out with COVID,” said Addison, whose team is now 6-1 in duals. “I have been telling the guys that this team is capable of (making an impact at state). We just have to keep our heads straight for the rest of the season.”

Lewis showed he could be a contender in his weight class as he improved to 12-1 after a 3-2 victory against Larry Smith. The Van Horn senior found ways to not go down after multiple shot attempts from Smith. He jumped out to a 3-0 lead with a takedown late in the first period and a nescape in the second.

Smith got points on a Lewis penalty and an escape but couldn’t get a takedown because of Lewis rock-solid defense.

“It just takes me back to my youth days,” Lewis said. “Whenever they would try to snap my head and take me down, I would sprawl. You just have to try your hardest. No one can beat you if you have the mindset to win.”

Addison noted that Lewis has the physical gifts to make a good wrestler.

“He has a crazy motor on him and he’s crazy athletic,” Addison said of Lewis.

Andrew Murphy (170) is another athletic wrestler for the Falcons who is also the starting quarterback for the football team. He utilized a trip and throw to take down Jackson Strongfield on a pair of occasions.

He jumped out to a 7-2 lead but Stringfield made a comeback and narrowed the gap to 8-6 midway through the third period. However, Murphy was able to get an escape, takedown and near fall to take a 13-6 decision.

“My main move. I like to set them up with the trip, it works a lot,” Murphy said.

The armbar worked for Darius Page (145) as he got a third-period pin against Lucas Estes. He used the move to roll his opponent over from the top position and get the fall to improve to a sparkling 19-1 on the season.

“I was tired because we just got back from break,” Page said. “I just have to keep getting better.”

That’s the same mindset Damon Washington (285) wants to have, he said. He filled in for starting heavyweight Mason Igou, who is out with an injury. Washington wrestled his first match in two years after taking last season off and pinned Gunnar McTamney in 1:41.

“It was a struggle because I wasn’t fully energized,” Washington said. “But when I got used to it, it all came back to me.

“I need to improve my mentality. I kept telling myself, ‘Don’t be tired.’”

Tevaughn Chambers (113), Steven Campos (138), Wesley Trenkler (160) and Sua each won by forfeit; Tristan Page (106) got a pin vs. Michael Henry in 16 seconds, Demarcus Pesnson (152) controlled his match from start to finish for an 11-0 victory over Ellis Edwards and CJ Nelson (182) grinded out a 5-2 decision against Jackson Wimberly.

For St. Michael, Drew Stanfield (132) won the only contested match for his team by getting  a pin in 1:20 against Robert Arkinson. Defending state champion Lucas Berry (120) and David Maschger (126) each won by for the Guardians.