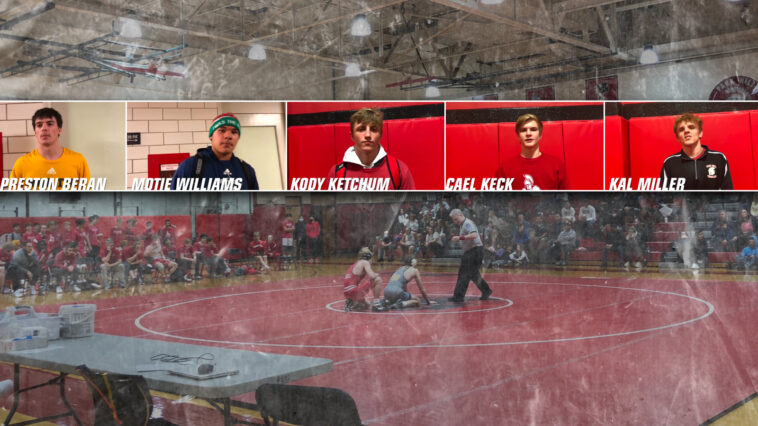 KANSAS CITY — Liberty North won the first six contest matches and then held off a charge by Park Hill to pick up a 48-28 win on Tuesday night in a Suburban Conference gold Division showdown at Park Hill High School.

The win was the second in a row for the Eagles over the Trojans. Despite the spread in the final score, the outcome of the match was still up in the air with two matches to go.

The Eagles held a comfortable 39-6 lead at one point before Park Hill rattled off four wins in a row. That pulled the Trojans within 39-28 and conceivably two pins would’ve capped the rally.

Instead, Preston Beran and Nathan Sola got wins to end it on a positive note for Liberty North.

Beran fell behind 2-0 on an early takedown by Mason Turner (160 pounds) but then got a hold of his leg after starting on bottom and pinned him 38 seconds into the second period.

“I was down in the beginning but I kept fighting and he ended up on his back and I stuck to it,” said Beran, now 11-9 on the year and 2- 1 in dual matches. “It was nice (win). In duals the atmosphere is a lot more hype and getting the win as a team feels good. Park Hill has always been a really good, competitive team. We are doing good. We’ve beat Ray-Pec, Park Hill South and now Park Hill. We just got to keep it going.”

Nathan Sola followed with a 5-1 win over Luis Camacho at 170 to close out the dual for the Eagles.

Liberty North started with wins in the first four matches by pins to take a 24-0 lead over the Trojans. Trevor Thorn (182) got a fall over Elijah Franco at 1:02, before Mason Bowen (195) got a first-period pin over Diego Jiminez in 1:29.

Park Hill’s first points were a forfeit to Erik Egstad at 106, but then Liberty North followed with three more wins to push the lead to 33 points.

The meat of the Trojans’ lineup then rattled off four wins in a row to keep it close with two pins and two tech falls.

Cael Keck started the comeback for the Trojans with a quick pin over Lucas Titus, coming at 1:14. Keck (10-3) secured two quick takedowns before getting the fall on a near-side cradle.

Kody Ketchum (138) and Kal Miller (145) posted tech fall wins for Park Hill. Ketchum got an 18-3 win over Joseph Knight in the third period, ending it early with a pair of takedowns.

“I got banged in the chin pretty hard,” Ketchum said. “That threw me off, but I was out there hitting my stuff.”

The Maryland-bound Miller built a 10-0 lead over Alft thanks to a pair of takedown, nearfall combos in the first two periods. He got four more takedowns in the third period that ended the match.

Ethan Vande Ven got near fall and pin in the third period to win the 152 match, the final win for the Trojans — 1-2 in duals.

“We got a little bit of a murder’s row and got a comeback going, unfortunately where we started, it is hard to comeback that far down,” Park Hill coach Jacob Beck said. “We had a chance, we did. It is never fun to lose. We got to get tougher. We gave up too many points and that is a little bit of a habit we got to fix with daily training activities and attitude. We talk about taking pride in yourself and your teammate.”

Another win over a traditional power like Park Hill is an example of the progress made in year three under Coach Lance Moore.

Both teams head to the 61st Annual Joe Crouthers Invitational this weekend at North Kansas City High School. Park Hill, though, will have a dual against Blue Springs on Thursday, the starting three days of wrestling.

“We have a good chance this weekend to get success at the North Kansas City Tournament,” Beck said. “Just take pride in your work and hold everyone accountable, that is the biggest thing.”