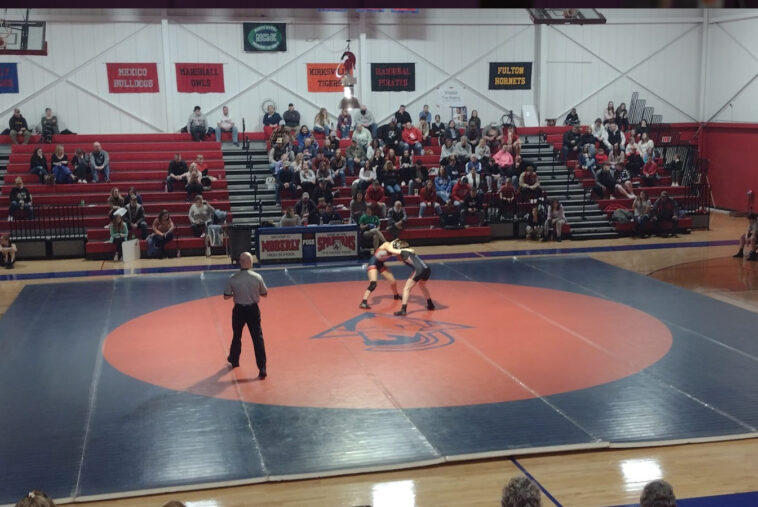 This is Moberly’s first year of having a girls’ wrestling program and with that comes growing pains that the Mexico Lady Bulldogs are all too familiar with. It takes intentional effort by the coaches and wrestlers to grow a program. Based on conversations with Coach Senor, his team wrestled really well yesterday and wants to continue the momentum to finish the season on a solid note.

Below are the results of the dual vs. Moberly:
Mexico 54, Moberly 0

105
Katherine Bowen (Mexico) over Unknown (For.)

110
Alizabeth Welch (Mexico) over Unknown (For.)

174
Shelby Shramek (Mexico) over Unknown (For.)

Dual Highlights:
In the only match featured on the night, Abbigale Drew went to work right away with aggressive hand fighting and would secure a takedown about halfway through the period. After a few attempts, Drew secured the fall in the first period with just under thirty seconds left.

Future Outlook:
With this win, the Mexico Lady Bulldogs are 14-4 overall and 3-0 in conference competition. The Lady Bulldogs are presented with the opportunity to capture their first NCMC championship on Thursday evening. Both Fulton and Mexico are undefeated in NCMC duals up to this point in the season. Overall Mexico is now This was one of Coach Senor’s goals for his team this season, to compete for a conference championship. He believes that it should be a close dual with plenty of good matchups.

The Mexico Lady Bulldogs are off to St. Charles West for a triangular meet that will include NCMC rival Fulton on Thursday. The dual versus Fulton is set up to be against the top two teams in the NCMC. Both of these opponents are District Tournament opponents, which is now only two and a half weeks away now.

They will close out their week with a trip to the Kansas City side of the state for the Liberty North Tournament. There are 21 teams scheduled to attend the “Queen of the North” tournament, including Mexico. Most of the opponents at this tournament are not going to be seen again unless it is at the State Tournament. However, it will be a great late-season gauge for the Lady Bulldogs to see how they measure up with the Kansas City area wrestlers.

The Lady Bulldogs will close out their NCMC Conference Dual season with a matchup in Kirksville against the Tigers on January 25th. They will have one last dual against Battle on the 26th before their regular season finale on the 29th at the Seckman Tournament.