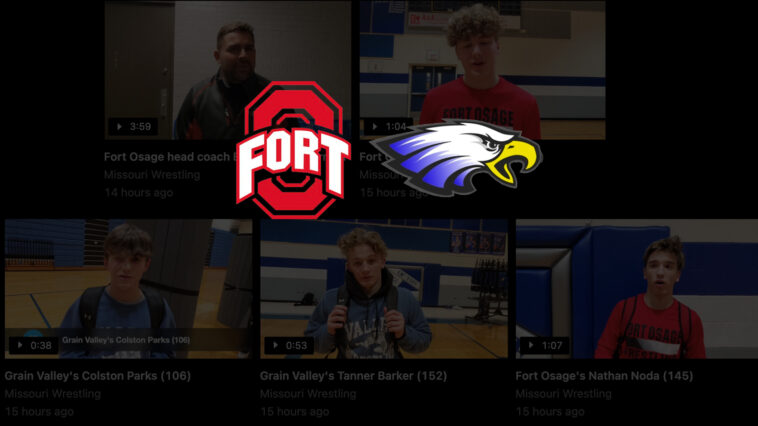 Some of their wrestlers were out with injuries and other reasons, which left the Indians with four open spots to Grain Valley’s one.

Even while giving up 24 points in forfeits, Fort Osage managed to win six out of nine contested matches to squeak out a 39-37 victory at Grain Valley High School.

“The memory of last year when they came and beat us at home was still fresh in our minds,” Fort Osage head coach Brandon Wackerman said. “We knew it would be challenging with three or four opens of our own. We have had  some bad luck and some injuries.

“Every guy came in and had to do something unique, even if it was just to make weight even if they got lost by fall. Everyone had a role. Every guy played a part. Until the last two or three matches, I tried not to look up there (at the scoreboard).”

One of the Indians who didn’t experience the loss to Grain Valley last year was 145-pounder Nathan Noda. He transferred to Fort Osage after three years at Truman and got the biggest win of the night for his new team.

With the team score tied at 33-all, Noda and Grain Valley’s Kollin Hansuld. Both were locked in a competitive match as the score was at a 4-4 deadlock following an escape from Hansuld in the second period. Noda got his arm around his opponent’s head and got a takedown and a pin in 3:16 to give Fort Osage a 39-33 edge.

“I moved here to be as competitive as possible and this team has helped make that happen,” Noda said. “To get that win for my team meant a lot to me.

“His shots weren’t the greatest, so I just sprawled hard on him and put him on his back. I was hoping to get a fall there before I went out of bounds.”

The final match saw Grain Valley senior Tanner Barker (152) get 11 takedowns and an escape to beat John Newton 23-9. If Barker would have got a pin, the team score would have been tied and a tiebreaker rule would have gone in effect but he was unable to turn his opponent.

“I was going out there trying to get six for the team, but I couldn’t do anything on top because he was sitting there and stalling,” Barker said. “I just wanted him to get up and make him work.”

Gavin Gallman (220) played a critical role in Fort Osage victory, as well, when he controlled his match with Gavin Barker from start to finish and used an arm bar to get a fall in 4:54.

“I was in a weird position and I just fell into him,” Gallman said of the pin.

Fort Osage’s Colby Gray (120) and Grain Valley’s Brock Smith had the most competitive match. It was a low-scoring affair as Gray got a reversal from the bottom position in the third period after he rode out Smith in the second as he claimed a 3-2 victory.

“That’s not a match you’re going to go to the bathroom during,” Wackerman said. “You know it’s going to be a good match and a grinder.”

Grain Valley won three matches but none came by pin, which helped keep the Indians in it. Colston Parks (106) got a throw and a pin in 32 seconds against Kaiden Johnson and Jace Worthington (170) got four takedowns and a near fall to help himself earn an 11-5 decision vs. Jasen Periman.

“Any time you wrestle Fort Osage, you know they are going to be tough and that’s what they were,” Grain Valley head coach Jeff Bowman said. “They wrestled well and they looked good. We came out flat in a couple of matches, but we will get better.”