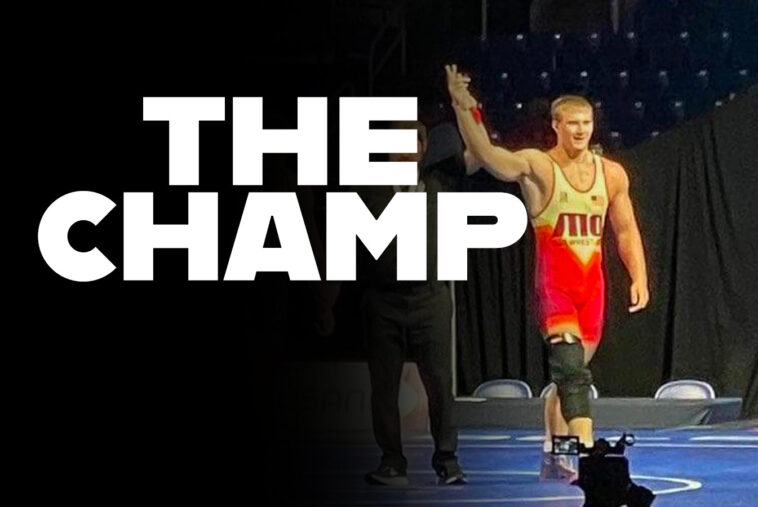 The Guardians wrestling prodigy competed in the Greco Roman bracket at the 285 pound cadet weight class at the annual US Marine Corps 16U & Junior National  on July 21 in Fargo, N.D.

But he didn’t just compete, he dominated.

Stillwell had two victories by technical superiority, one by fall and two by seven-point decisions to roll to a national championship, becoming the first wrestler from Eastern Jackson County to earn first at the tournament since Oak Grove’s Tyler Curd did it in 2016.

Stillwell defeated Roy Phelps Jr. of Illinois my technical superiority in the first round; pinned Ben Lloyd of Pittsburgh in the second round; beat Caleb Rodriguez of Naples Florida 7-0 in the quarterfinals; Brayden Hill of Kansas fell to Stillwell 8-0 in semifinals; and Stillwell capped off his championship run with a 7-0 decision against Wyatt Schmitt of Shorewood, Illinois.

While Stillwell accomplished an incredible feat, he wasn’t satisfied.

He ended up finishing third in the 285-pound cadet freestyle bracket after falling to Aaron Reis of Ohio in the quarterfinals.

“I really wanted to win both brackets,” Stillwell said. “I was a little disappointed that I took third in freestyle. I will just need to work harder next year.”

And it’s those high standards and competitive drive that have made Stillwell one of the best young wrestlers in the country.

“No one is going to outwork Sampson in the wrestling room, on the mat or in the weight room,” St. Michael head wrestling coach Matt Infranca said. “He is always looking to get better.

“Sampson expected to win both brackets. He wrestled a little tight in the quarterfinal match (in freestyle). I think if they wrestled again, Sampson would win. When Sampson trips up, it’s a shock to everyone.”

Stillwell said the mistake he made in his quarterfinal match was not following the gameplan his coaches came up for him.

“I learned my lesson, I should have followed the game plan,” Stillwell said. “I didn’t listen to the coaches and did my own thing. They told me not to get under him and I did and I also took bad shots.”

Added Infranca: “One he got beat, he started to relax and wrestled a lot better.”

However that doesn’t take away what he accomplished in the Greco Roman bracket. He admitted he likes freestyle more than Greco but has become one of the best at the latter Stillwell finished in second place in that division at the World Team Trials in May. At Fargo, Stillwell said his underhooks, two-on-ones and drag moves were what worked for him.

“Sampson really holds his position really well,” Infranca said. “And once he gets on top, he turn just about anybody.

“To finish first in Greco and third in freestyle is still a great accomplishment.”

Stillwell said he plans on competing at the Super 32 Challenge Tournament in North Carolina later this year, a tournament that he said would be even a bigger challenge than Fargo Nationals.

Next year, Stillwell will compete in the junior division and will likely face tougher competition. Infranca, however, said it shouldn’t make much of a difference for the talented sophomore.

“He’s still going to be going against high school boys and he wrestled some upperclassmen at other tournaments like the World Team Trials and still did well,” Infranca said. “He will still be in the mix.”