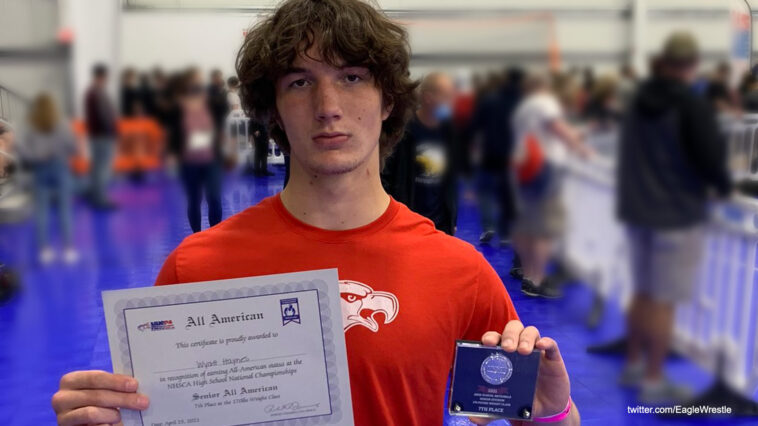 2x State Placer Wyatt Haynes from Wentzville Liberty wasn’t done after his dominant high school season. A season where he went 49-2 with 41 of those being falls. 41! (If you’ve never seen Haynes wrestle… beware of the cradle). Along with that impressive tally he secured a state finals trip adding to his 3rd place finish from the 2020 season.

NHSCA Nationals is one of the toughest offseason tournaments around and earning All-American status there, or anywhere, is nothing to scoff at. Haynes was determined to earn that coveted title before he moved on to college where he will chase the same dream again. Starting his tournament off in the R32 nothing seemed to change from his regular season as he pinned his California opponent in the first period. His R16 opponent, this time from Pennsylvania, put up more of a fight but still Haynes found his way to a pin in the third period.

His quarterfinal opponent came in the form of a 3x Colorado State Placer, being a 2x Finalist, and a State Champion this past season. Losing 8-3 with seconds to go Haynes gave it one last desperation go and lost the match by pin. Haynes first backside match just so happened to be his bloodround match for All-American status, his opponent was a 3rd place finisher in Tennessee this past season and placed the same at the recent High School National Recruiting Showcase. In a tight one the Wentzville Liberty product pulled out a 2-1 win.

Next match for Wyatt was a California 5th place finisher who snuck past Wyatt in a close one 6-3. With this loss Wyatt moved into the 7th place match where he faced a New York 7th place finisher. In this match the second period was where you wanted to be, Haynes gives up an escape, gets cradled, earns a reversal, and then PINS his opponent from the top position. If this performance is any indication of what he’ll do at the University of Chicago then we will be sure to keep our eyes on him!