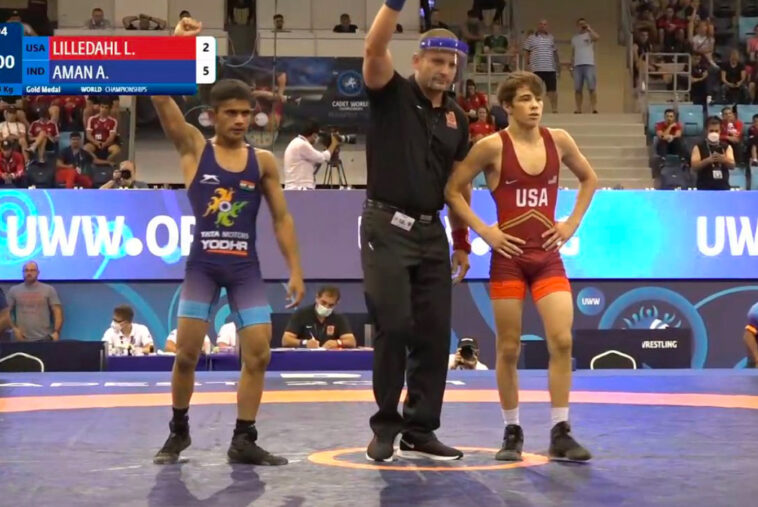 Awhile back we saw Luke Lilledahl make an incredibly dominant run at Cadet World Team Trials. I think everyone who watched that run or Lilledahl’s freshman state run with CBC had high hopes for his trip to Budapest. But this kid is the real deal! He continues to impress with toughness, awareness, and lightning quick attacks. Lilledahl might’ve fell short of his expectations, but he soared past everyone else’s.

From the beginning it was tough for the CBC product, Lilledahl drew a Russian in his very first match. This match was truly insane. Lilledahl goes to the break after a slow first period down 4-0 from a quick takedown and gut. After the break Lilledahl exposed his opponent earning two points, after a lot of pushing the pace Lilledahl then exposed his opponent again, this time to his back! Luke didn’t stop there, earning an outright lead with a gut to top his offensive spurt off.

After this the Russian earned a reversal and two exposures from a leg lace. At the end of the flurry it was 9-6 Russia with 12 seconds left. Meeting his opponent back in the circle he pushed the Russian straight out without a fight earning a point. 9 seconds left Lilledahl desperately pushes his opponent to the edge again but this time they stay right in and Lilledahl takes him to his back again! This time with an underhook to a far knee pick that was hit perfectly. Time was out, that was it, Lilledahl had worked his magic into the World Quarterfinals off a 9-9 criteria win.

Lilledahl’s quarterfinals went much smoother than his first round. This time facing off against an opponent from Kyrgyzstan. Luke led 4-0 at the break with two takedowns, and cruised through his second period with two more, an 8-1 victory, and a semifinal berth. Lilledahl had to win another tight one in his semis, this time against Kazakhstan. Lilledahl gave up the only point of the first period on a shot clock point. Luke then gave up a takedown with only a minute left, going down 3-0.

Again, wasting no time, Lilledahl gets in on a double and scores right away cutting the lead to 3-2 with 49 seconds left to work. Pushing the pace as he did all tournament his opponent took a bad shot with 20 seconds left which led to a beautiful reattack from Luke earning him the outright lead 4-3. After he captured the lead he only had to hold the lead for 12 seconds. Boom Luke Lilledahl Cadet World Finalist.

Luke’s finals matchup was a tough one, a slick opponent from India took the first point on a shot clock point, and then further his lead to 3-0 with a slide by takedown. Lilledahl did strike back however after a bad shot he capitalized and scored with a reattack to go behind for a quick 2. With only 32 seconds left Lilledahl couldn’t quite pull this one out, giving up a takedown at the end with the match ending 5-2.

We can’t wait to see the potential of Missouri’s newest rising star as he continues to develop, and if starting off with a Cadet World Silver says anything, I’m positive Luke will be amazing to watch in the coming years. Good Luck Luke!