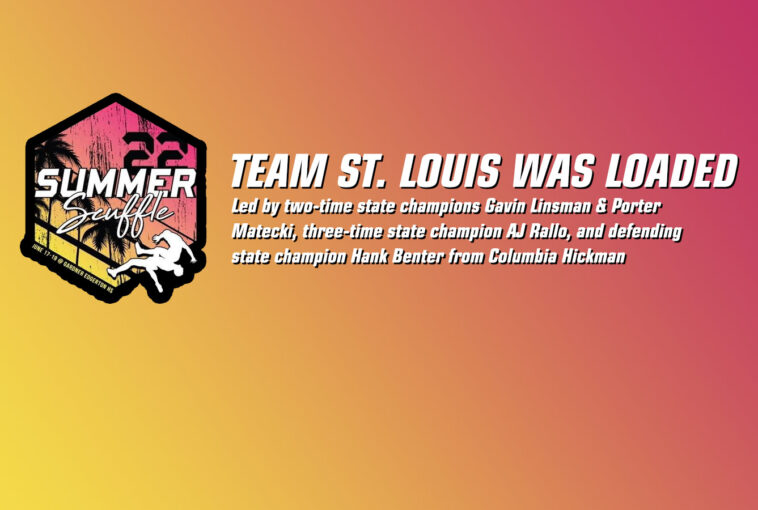 Their group appeared poised to win the tournament, despite having to give up 18-30 points to the opposing teams due to forfeits. The tournament started with two pools – red and blue – which were round-robin style. St. Louis started in the blue pool and finished 6-0 to advance to the gold bracket.

However, after defeating DC Gold, a team out of Kansas, 46-28 in the blue pool, St. Louis fell to DC Gold 43-36 in the gold bracket, and ended up taking second place after a 54-30 win over Tongie Red and a 51-25 victory over the Southwest Missouri Stingers.

Having to give teams free points due to forfeits put St. Louis at a disadvantage, but the wrestlers still held their own.

Seven of its competitors finished 10-0 and two finished 9-1. One of those, of course, was Matecki (126 pounds), who was named the Most Outstanding Wrestler of the Tournament as he pinned every opponent that he faced.

“There are some good kids here, my last match was probably my toughest,” said Matecki, referring to his pin in 3:36 of Sam Melton of Southwest Missouri. “I had a good time here.”

Rallo (138) also went 10-0, which included five pins, a tech fall, a 11-0 major decision and a hard-fought 6-2 decision in his final bout with Southwest Missouri’s Brayden Tate.

“I thought I wrestled well, but I thought I could have got to my shots more,” Rallo said of his match with Tate. “In the first round, I thought I had a nice go behind and I did pretty well on my feet.”

The senior served as a leader for St. Louis as he’s one state title away from being a four-time champion.

“It is awesome to be with my teammates and as a senior, I know I need to be helping them get better,” he said. “I get to see them in this tournament and help them know what they need to do better.”

Added Linsman: “A tournament like this is really helpful because we can see what we need to work on for the high school season.”

Linsman bumped up from the 138-pound division, to 152, and still finished undefeated despite being undersized compared to his opponents, including six pins and a decision decided by three points.

“I feel like I did really well in the tournament and stayed in good position,” Linsman said.

“They needed a spot last year, so I did that and they invited me back and I am happy to be back,” Benter. “I wrestled pretty well and didn’t give up too much.

“Ben Carter hasn’t had the best luck when getting spots on the team, but he’s a great wrestler,” Linsman said. “He’s scored a lot of points for us in tournaments.”

“And Rome has been training his butt off. He works so hard in the practice room and the weight room and makes sure he does everything right.”

Lukas Walker was a standout for the Stingers as he went 9-1, with his only loss coming during a 5-4 decision against DC Gold’s Andrew Honas. His nine wins included four pins.

“I threw legs in when I probably shouldn’t have,” Walker said of his one loss. “I will just get better and learn from it.”