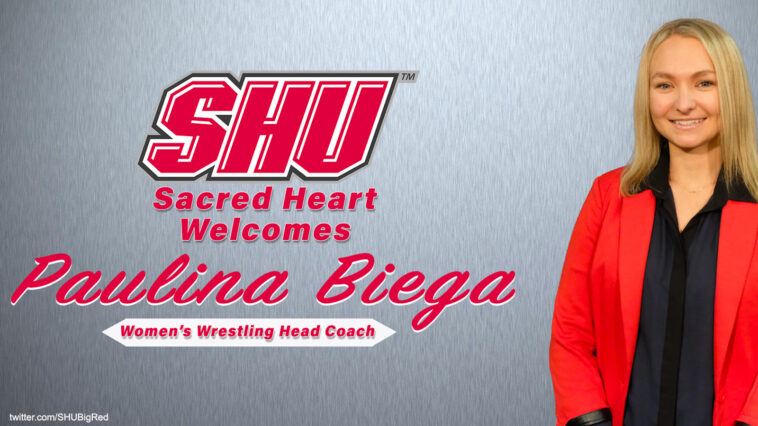 Unless you have been living under a rock for the past month you shouldn’t have missed the wrestling community explode over Paulina Biega. The new hire for Sacred Heart University as their Head Women’s Wrestling coach. Originally thought to be the first woman to head a DI wrestling team the community immediately began expressing their support all over social media. Biega took to social media herself to correct this however as Dany DeAnda was actually the first woman to fill that role. Regardless this is a HUGE deal, and the story behind it is incredible as well.

Coach Biega’s journey began in Poland when she was 12 years old. Her father didn’t think her PE class/teacher was adequate for his daughter, so he took her to wrestling practice. Paulina had no fear from the start about being the only girl involved. Even taking it as a challenge to an extent, an almost “I can do this too” mentality that she would carry with her throughout her career. By 14 she was sent to boarding school and began her struggle with injury. Coach Biega suffered through a 3.5-year elbow injury keeping her on and off the mat until it seemed that wrestling had left her life for good.

2012-2013 is when things began to shift for Paulina. She had moved to California as an Au Pair, but couldn’t quite get wrestling out of her mind, she missed it. After going to nearby high schools to see if “she still had it”, which she surely did, Coach Carl Murphree from Missouri Valley came calling in 2013. When it came down to her college decision time was a big factor, as she was from Poland and was worried about her visa. Her other interest was the well-known Menlo College, but Coach Carl and Missouri Valley moved quickly which meant a lot to Biega.

Coach Carl picked Paulina up from the airport in Kansas City himself and during the drive across the state Paulina said as the landscape changed it feel more real. She had only a semester to truly acclimate herself and settling into Marshall, Missouri of all places still felt like a dream. She said, “the whole process, starting from the first phone call with Coach Carl to arriving on campus was like living in a movie.” Still, Paulina knew she had a difficult road ahead, college is no easy task and at the time she was still developing her English. She would practice this however while also studying as she would read her vocabulary words to help her learn the language. This hard work would pay off as she finished her degree and graduated a year early.

While this is going on it’s important to remember that Coach Biega was away from her home and family this whole time. After a long four years, she returned home as she experienced extreme homesickness while at Missouri Valley. After some time at home and some reflection, she realized she did her most important growth in the states and wanted to return. With her drive, it’s not surprising that she soon found herself in Georgia running a youth club while also selling athletic equipment. Soon after however her visa had expired and she returned to Poland, the shocking development with her return was that she had not yet been granted a green card even though she had been applying since 2012. Eventually, the tides turned, and she was granted a green card, to her it was an opportunity, still even with that accomplished the process took 18 months. Even after all that waiting Biega was still fired up about it and even plans to try to become a U.S. citizen.

The process for the Sacred Heart position was an interesting one for her. She was coaching at Campbellsville University when she applied in October thinking it was a longshot to even be considered. As time went on, she realized it would be very difficult to leave as she had become attached to “her people” in Kentucky. Then, at the NAIA National Tournament talks increased and the next thing she knew they had offered her the job. Now Biega is focused on the future, hiring an assistant is her top priority along with recruiting she says. Her schedule is almost done being put together and she says they WILL be competing this year.

Paulina Biega is on a mission. She’s a trailblazer for this community as in her own words “I’m trying to build my brand, not for me but for the girls around the country. The work women wrestlers are willing to put in is the same as the men, these girls cherish the sport.” She doesn’t see the point in not giving the girls a chance at the DI level and I agree. When asked about the future of women’s wrestling at the DI level all she had to say was “It’s going to happen.” It’s clear to any that meet her, Paulina Biega’s true love is coaching. She eats, sleeps, and breathes wrestling. I’m super excited to see this growth in the women’s side of the sport and we wish her and Sacred Heart University the absolute best of luck in the upcoming season!