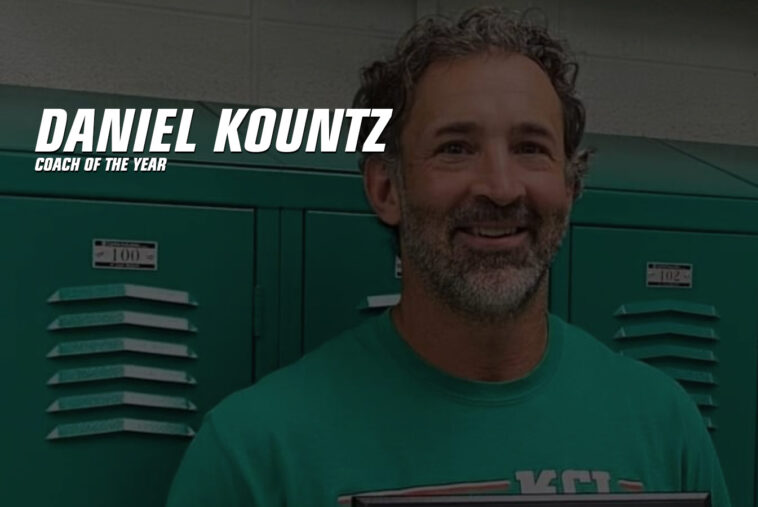 Daniel Kountz has been teaching and coaching for 17 years at Mid-Buchanan High School in Faucett. That is also where he went to high school and aside from four year at Missouri Western State University, in nearby St. Joseph, he has been around the Dragons wrestling program for more than 20 years.

He wrestled there and won three state championships (1998-2000) before returning to coach the program.

He has steadily built up the program and it hit a crescendo this year when the Dragons won the Class 1 MSHSAA State Championship in March. Nine of his 12 state qualifiers brought home medals and helped the school win its first state championship in any sport.

For his efforts, he was named the Boys Wrestling Coach of the Year, an award presented by MSHSAA and the National Federation of High School Associations.

Kountz was heading to the gym early last month for what he thought was a spirit day assembly. One side of the gym was high school and junior high students and the other side was the elementary students.

He walked in and saw his MSHSAA administrator Greg Stahl and Kountz’s family was there too. He finally suspected something was up.

“I was extremely shocked … I had no clue,” he said. “I was not expecting that but very honored. It kind of took me … it hit me emotionally. I was so proud of the moment and I had my family there, they brought my family in. It was a nice presentation.”

Kountz, though, is quick to point out the award isn’t about him. It’s about the program. The assistant coaches, wrestlers, parents and even alumni.

This year the school hosted a postseason tournament and several former wrestlers and their family members helped out in various capacities.

“It means we are doing things right,” Kountz said of the awar. “Good kids; good coaches, it’s a good reflection of the program. I’m hoping what brought the attention is we do take pride in working hard and winning, but winning in a respectful way. Maintaining character no matter what, win or lose. I’m proud of that. I’m proud of every kid that went through the program and I hope they were affected in a positive way.”

The development of a state championship has been years in the making. In 2012, the program secured a fourth-place trophy.

A lull followed for a little while but looking at the youth program he knew the pieces and depth was coming. The program went from having a handful of qualifiers in the early 2010s to getting eight or nine in recent years.

Add in the co-op with North Platte, which brought in some quality boys and girls wrestlers, the pieces were falling into place. The Dragons took 11th in Class 1 in 2019 and then moved up to seventh in 2020.

“We will be in this race and this is something we can do and sell the kids on it,” Kountz said as this past season started. “They bought in completely. We competed in tournaments, just a random tournament and the kids are watching team scores and pulling for each other. At our conference duals and developed a better understanding of what their job was for their team.”

The Dragons will open this year with 10 of the 14 starters back and of that number, eight were state qualifiers. Then, of that number, Mid-Buchanan will have five returning medalists to headline a roster that should still be a force in the KCI Conference and northwest Missouri.

“It will be harder this year (to repeat), we lost four big seniors and a state champion in Creed Webster,” Kountz said. “We will have to replace them but we do have depth from last year. I expect kids not in the lineup and a couple freshmen coming up who could help. We are expecting to be in the mix (for a title). It will be harder to repeat, they are coming after you and trying to knock you off. I kind of like that, the chip on the shoulder. We have to be ready to get after it. We will continue to work hard, try to have fun and bring it every time.”