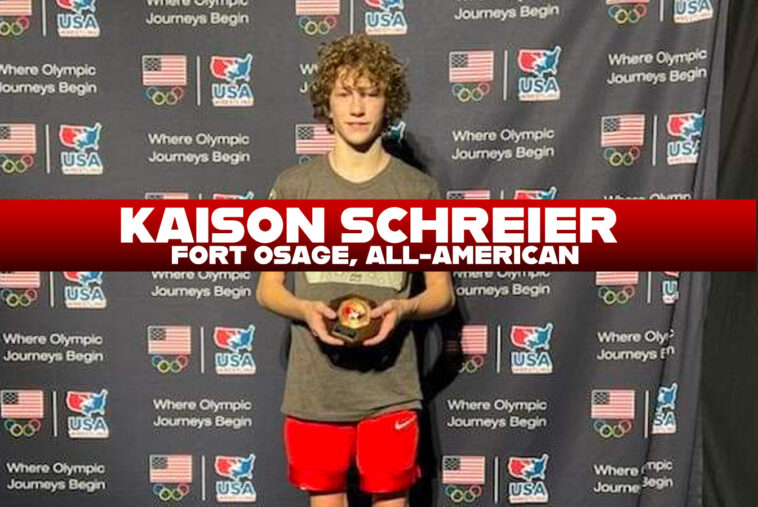 Kaison Schreier may be mature beyond his years.

The soon-to-be Fort Osage freshman has displayed his maturity to his wrestling coach Brandon Wackerman and his MO West Wrestling Club teammates.

That was evident in his reaction to what he accomplished on July 18 in Fargo, N.D.

The youngster became the first Fort Osage wrestler to earn All-America honors at the 2022 US Marine Corps 16U & Junior Nationals tournament since Elias Vaoifi did it in 2016. He took seventh in the 88-pound cadet freestyle division.

“I think I could have done a little bit better.” Schreier said.

And that’s one of many reasons Wackerman said Schreier is mature.

“I think he’s really maturing after he said that he felt he could have done better,” Wackerman said. “You’re never finished. There is always something you can get better at and there is something that you can always clean up.

“I like the fact that he just earned All-American and still knows there are some things he needs to work on. That’s a great sign for his maturity.”

Schreier made it to the quarter finals after a 10-0 tech fall win over Oklahoma’s Connor Pounds in the first round, a 12- tech fall vs. Montana’s Cody Westlake in the second round and a 11-0 tech fall victory against Iowa’s Elijah Hyet in the third round.

Schreier then fell to eventual second-place finisher Caleb Noble of Wisconsin 10-0 before finishing 2-1 in the consolation bracket. He defeated Tennessee’s Tanner Tran 10-4 in the seventh-place match.

Schreier said he could have moved his feet more during his freestyle matches, but said he did well on taking shots.

“He did a great job on wrestling smart and wrestling tactically,” Wackerman said. “It was a terrific trip (to Fargo). He was only one win away from getting All-American in Greco. He wrestled in both styles and I liked that he wrestled outside of his comfort zone.

“He had great shots and he had good secondary defense and did a great job on defense when the other kids got in on his legs.”

And Schreier was able to find success despite wrestling in two brackets – Greco and freestyle – although he admitted it wasn’t easy.

“After freestyle, I was pretty sore and tired,” Schreier said. “But I just kept wrestling.”

Going into his freshman season at Fort Osage, Schreier said he hopes to place at the Missouri State High School Wrestling Championships in 2023.

It’s something he could very well accomplish. With the success Schreier has had in freestyle wrestling, it could translate over to the high school folkstyle season.

“Kaison really has a good wrestler’s mind,” Wackerman said. “His mind is a little underrated on how in tune it is in wrestling. Kaison may not say much before a match, but he has watched other kids during the tournament. He absorbs quite a bit. He’s always crafting out a plan and that’s the secret to evolving.”