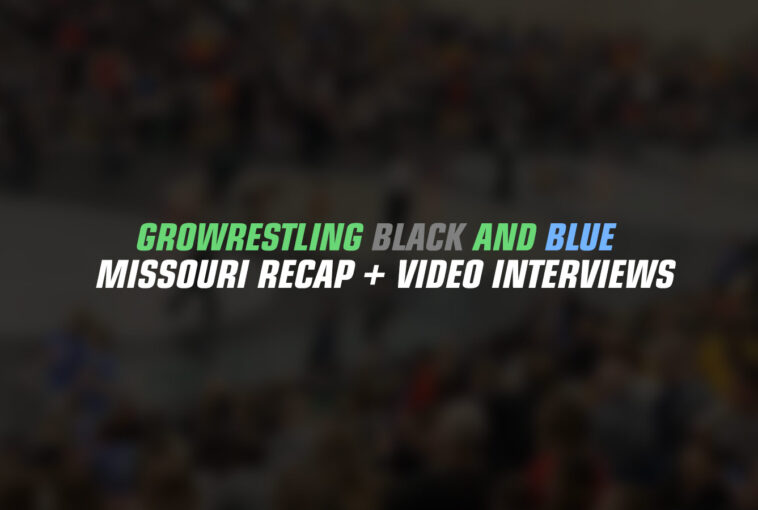 Some Missouri high school wrestlers competed in the Black and Blue Tournament last Saturday at Olathe West High School to get ready for some bigger events coming up.With the Central Plains and Southern Plains Tournament on the horizon, some local wrestlers and some from out of town used the tournament to get some wrestling before the competition ramps up in late May and early June.
Video Interviews:

Not only that, but the biggest high school wrestling tournament of the year, Fargo Nationals, is just two months away.Below, MissouriWrestling.com breaks down each weight Class and summarizes the results for each top finisher from Missouri in each weight class in a tournament that was run by GroWrestling.com owner Joe Williamson.

135-143.7: Grain Valley junior Dru Azcona dropped a heartbreaker in a 14-14 tiebreaker loss to Davis Joiner of Lebanon, but won his other three matches which included two by tech fall and one by pin as he took the overall tiebreaker for first place.“I didn’t really condition for this, but I probably should have,” Azcona said. “I wanted to wrestle different people and see what I needed to work on.”

143.7-150.4: Belton’s Brady Littleton continued his successful offseason in freestyle wrestling as he earned three wins by tech fall and one by pin, including a 10-0 win against second-place Greg Dillon of Blue Springs.“This is just honestly for mat time,” Littleston said. “I was in a few sticky situations today, but for the most part, it was pretty easy.”

159-165.8: There is a reason Staley’s Merrick Murray is ranked in the top 100 in the nation for high school freestyle wrestlers. He showed why as he won all four of his matches by tech fall.“My cadet division only had two matches, so I decided to hop up to the junior bracket, too,” Murray said. “I am wrestling cadet and junior duals (at Fargo Nationals) so might as well get that feel.“I am just looking to climb (the top 100 list).”