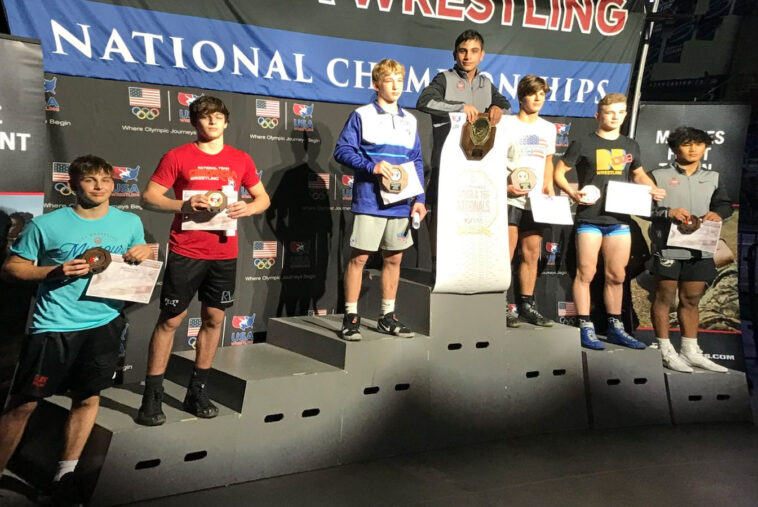 Fargo has come and gone, and with that we have amazing accomplishments to write about! Our boys performed well placing top 20 in every age group except Junior Greco where they took 26th. Fargo is the biggest tournament of the year and placing is a coveted feat so kudos to these young men before we begin to take a deeper look at the performances of our Fargo All-Americans.

Orine followed up his impressive Runner-Up State finish with a 5th place finish in the 16u (cadet) Freestyle division. Draegen started hot with a fall against a tough opponent from California. Next up for Orine was an impressive wrestler from Colorado, down 8-2 with 35 seconds left, Orine found his way to a takedown and a few laces to take the lead 10-8! This incredible comeback had to get Orine fired up because his next match he teched a Wisconsin state champ in just under 4 minutes! This win secured his position in the Quarter Finals against the #3 wrestler in the country at 113. After a tough battle Orine fell 19-10, moving him to the backside of the bracket.

Next, Orine had an unbelievable performance against a 3rd place finisher from Minnesota. Teching him just a 1:45 into the match, Orine earned himself All-American status at the coveted Fargo national tournament. Next up was a talented opponent from Georgia, the bout started intensely and never ceased. However, Draegen once again pulled off some late match heroics, down 13-10 with just 41 seconds to go. Orine scored a quick takedown leaving him 30 seconds to take the match. With a clean ankle pick, Orine does just that with 12 seconds left, putting him into the Consi-Semis.

Orine again fell short of his goal in this round to a tough opponent from North Carolina. Moving to the 5th place match where he won a tough 9-6 match against his Pennsylvanian opponent.

If you don’t know Fugitt’s name you should. A two time state finalist with an impressive Class 4 State Championship run last season with all bonus point victories with two falls in the first period. This time around Fugitt was up a weight at 120 and competing in the 16u Greco Roman division. Fugitt’s run started off hot with him teching his first two opponents in under a minute, putting him in the round of 16 just like that.

Another tech and Fugitt found himself a tough opponent in the Quarterfinals from Colorado, still getting by comfortably 6-1. Fugitt met his match in the Semis, against a Nebraska state placer and eventual Fargo champion, taking his only loss and moving directly to the Consi-Semis. There he had a tight 7-7 match where he won on criteria; he scored his lead, taking a step out with 1:20 left and held on from there. His 3rd/4th place match was against his Quarterfinal opponent once again, this time doubling his points winning 12-1 ending his incredible run.

Braxton is going to be just a Junior for Ozark next season. He’s two for two in state placements with a 3rd place finish in 2020 and a 2nd place finish this past season. Long story short the kid knows his way around a wrestling mat and he just proved that by placing at the biggest tournament of the year. Braxton started off his 16u Greco run with a 31 second tech of his Illinois opponent. He then took care of a State Finalist from Utah with ease by the score of 10-4.

Strick fell the next round to a Georgia state finalist just barely 4-3, putting him on the backside 3 wins away from All-American status. His first backside match was ended by tech in just under 2 minutes. After this Braxton really clutched up, down 4-2 early in the match and in a bad position from a head and arm, he locked up a body lock from bottom and turned his opponent to his own back for the fall! Another quick tech of a New Jersey wrestler Strick had done it. All-American at the Fargo National Tournament. Strick finished out the tournament with an 8th place finish and we can’t wait to see him compete next year!

Freshman Sam Murphy from Mcdonald County is simply having a breakout season… as a freshman. After taking 4th place at 220 this past Missouri State Tournament he decided to go ahead and DOUBLE ALL-AMERICAN at Fargo in both 16u divisions. We’ll start with his Greco run. Murphy began with two techs and a fall, cruising to the semifinals in truly dominant fashion. In the semis he ran into a buzzsaw from Pennsylvania, moving him to the backside. A tough 6-5 loss led to Murphy being in the 5th/6th place match where he placed 6th.

Usually we would be done but no! Murphy decided to ball out in Freestyle as well, starting with a 12-4 win over a Pennsylvania wrestler and then a Fall over an Arizona opponent moving him into the Quarterfinals. His impressive run ended against a state placer from Virginia 5-1 moving him to the bloodround. The bloodround was comfortable for Murphy winning 6-0 earning double All-American status. Murphy then moved on to the 7th place match where he earned a win 7-0.

Keith Miley had an impressive resume already. 2x state Finalist at Class 1 with a State Title last year. But now he has decided to make some noise at the biggest tournament of the year. It’s important to mention as well that Miley was our only Junior age level wrestler to earn All-American status so way to represent! Miley started red hot with three consecutive Pins! Earning a spot in the Quarterfinals where he met a 2x Illinois state placer, losing and moving him to the backside. Properly inspired by his loss, Miley ran to the 3rd/4th place match with another pin and tech. He fell in his final match but we can’t do anything but cheer him on after such an incredible run!

Just a quick thank you to all these wrestlers and their efforts for representing Missouri well! If you competed but didn’t place I thank you as well for your efforts and hope to see you on the podium next year!