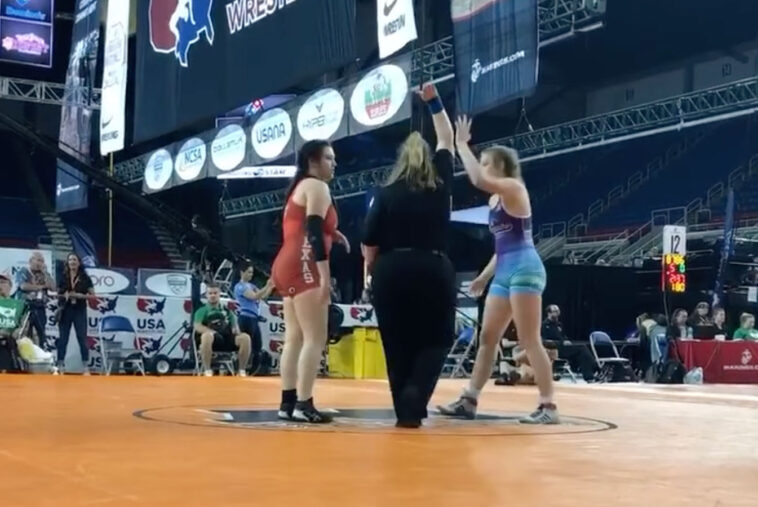 Man oh Man did the Girls represent! These girls absolutely rocked the country, taking top 5 in both 16u (Cadets) AND Junior divisions. Starting with our 16u teams 5th place performance, we had 6 placers, 3 finalists, and 1 champion.

The soon to be Sophomore from Marceline is starting her high school off to fast start with a 3rd place finish at the State tournament this past season and now earning All-American status at The Fargo National Tournament. Weese earned an early tech over a Utah state qualifier and then unfortunately fell to a 3rd place state finisher from Washington.

Clearly motivated by the loss, Weese rattled off 3 wins in a row, one being her nail-biting bloodround match. Up by one point with just 41 seconds left, Weese earned the fall and All-American status just like that. She then moved to the 7th/8th place match where she fought hard but ended with 8th place. Still a fantastic run for the freshman!

The sophomore from Lebanon has been building momentum from her 3rd place finish this past year at state and needed every bit of it to overcome an early loss. Johnson ran into a high profile California wrestler in the first round, luckily she got a bye through her first round wrestleback only needing 3 more wins to earn All-American status, easier said than done. Starting her run with a 12-2 tech and a first period fall, she had made it to the bloodround.

Johnson went on to win that bloodround match in a controlled 7-4 victory. After this she once again met her first round opponent, falling again, this moved her to the 7th/8th place match. There she fell to a tough opponent from Utah. What a great contribution for the team race!

The freshman state champion from Nixa showed up to make some noise and that’s exactly what she did. Starting comfortably with a tech was a welcome sight, but unfortunately Crahan ran into a 2x placer and state champion from Iowa, losing 8-3. Crahan then had another tough match sneaking past her opponent 10-9. With All-American status in sight just two wins away, Crahan ended her next two matches by fall!

Crahan’s next match was a tough one which sent her to the 7th/8th place match. There she rounded off her performance with a 10-0 tech over a North Carolina state champion. Earning some more points for Team Missouri with a 7th place finish, way to go Brenya!

Just a sophomore from Lebanon who finished fourth at this past year’s state tournament, went ahead and decided to put the country on notice. Haiser’s tournament should have taken longer to describe with her amazing run but she made it easy by earning ALL FALLS on her way to the finals, leading in every match at the time. In the finals she met a Minnesota state finalist who finally bested her, Haiser was however the only girl to score a point on her! Thank you for leading Team Missouri to a top 5 finish!

Last but certainly not least we have the DOUBLE All-American from Lebanon. Brumley was a 5th place finisher at the Missouri state tournament last year and either equalled or exceeded that finish in BOTH divisions. Her 16u performance was ironically thwarted by another wrestler from Missouri, Catherine Dutton from Liberty, in the finals after a single win to get there. As Brumley Double AA’d I’ll use her to transition right into our Junior teams 4th Place Team finish, with 7 All-Americans and 1 Finalist.

Brumley carried her pinning ways from the 16u division into her first two matches, ending them both under 50 seconds! In the Quarterfinals she ran into a 3x Indiana state champion, and later Fargo finalist, sending her to the backside of the bracket. On the backside Brumley repeated her pattern with two falls in two matches and dropping the third following match, this time to a Texas state champion. Brumley made sure to end on top though with a win in her 5th place match over a Washington State Champion with another Pin!

The Parkway West product has only been trending up since qualifying for state her sophomore year. From not placing to a state title, Paige has continued to prove she’s up for the biggest challenges including Fargo. Starting off with a pin that was followed by a tech, Paige was in the Round of 16. Paige fought hard but eventually fell to a tough Illinois opponent, sending her to the backside still needing 3 more wins.

Earning two more falls she had earned a berth to the bloodround. There she battled to a clutch 8-4 win over a tough Michigan opponent. Next Paige took another loss, placing her in the 7th place match where she had another grueling match, this time winning 8-6. We thank you Paige for your contribution to Team Missouri’s 4th Place finish!

The dominant 3x state champion from Desoto earned the top seed for this tournament. She displayed that dominance in her first three matches, with three straight techs, not giving up a single point. Foeller then found herself on the bad end of two back to back matches dropping her from the Semifinals to the 5th place match. Once there Foeller regathered her composure and put on another dominant performance with an 11-0 tech earning her 5th place. Foeller is a major producer at these next level tournaments!

The 3x Lafayette state champion has been on the national radar for awhile now. Her performance at this year’s Fargo can only help. Faith cruised in her first match to a 12-0 victory, however disaster struck in the second round with Faith taking an 11-5 loss. After this, however, Faith ran off SEVEN wins in a row to earn herself 3rd place. She not only impressed with the amount of wins in a row but also the fashion in which she won. Of the seven wins, four ended early with two pins and two techs. Faith is a true grinder for her performance and we couldn’t have taken 4th Place without her.

The 2x Kearney State Champion is a pinning machine. After two state titles pinning every opponent, she went ahead and pinned her way to the Junior division finals! However, because of few entries she only got two matches before her finals match. Her championship match was her longest match of the tournament but ended poorly resulting in a 2nd Place finish for Lexie. As our only Junior finalist, way to represent Team Missouri Lexie!

Her performance puts the cherry on top of one of the most dominant Team Missouri performances in ANY style at Fargo. These ladies deserve all the recognition in the world and are going to be making some noise at the next level here soon so keep your eyes peeled!