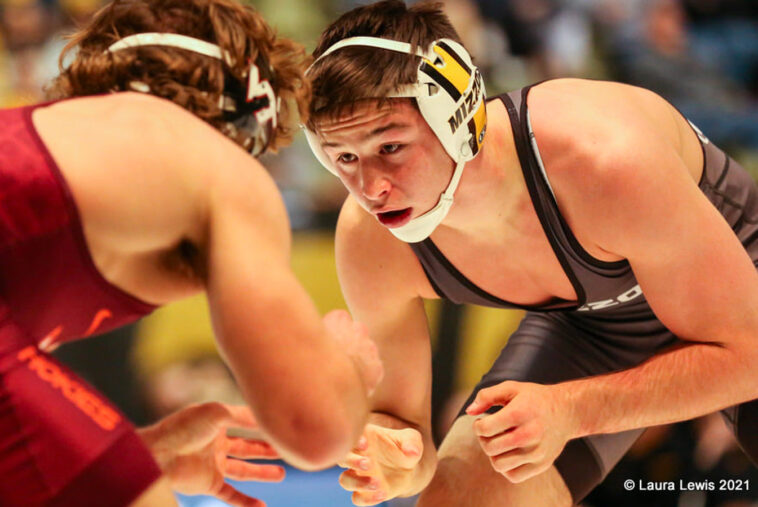 Mizzou welcomes top ten Oklahoma State to the Hearnes in the biggest conference dual for the Tigers in years. Oklahoma State recently suffered back-to-back losses to UNI and ISU, but then went on to beat SDSU earlier this week. Coach Smith said on the Inside Athletics radio podcast recently that he expects about 90% of the normal lineup. If I had to guess,  I think we don’t see Mocco for another week as he deals with an unknown injury. On the bright side, it does sound like Keegan O’Toole will make his return. On paper, OSU has an advantage in six matches, so Mizzou will either need some upsets, big bonus points, or likely a combination of both.

Surtin gets a chance to get a big ranking upset in this match, but that may require some smart wrestling on his part. Last year Surtin beat Mastrogiovanni 9-6 in an open tournament where Surtin got up to an early 6-0 lead. This year, Mastrogiovanni looks significantly improved with multiple top 15 wins. Mastrogiovanni has a very nice sweep single, which I think Surtin can nullify with his underhooks as long as he looks to get to them early and use them smartly. Mastrogiovanni is very lanky though and has had a lot of success when his opponents are aggressive in neutral. The biggest spot for Surtin to find success is from the top position though. Mastrogiovanni has been ridden out multiple times, even by unranked opponents. He hasn’t been turned yet, but it’s been close. In a dual where Mizzou will need an upset, I think Surtin has a good chance here. Surtin has hit a rough spot since the Scuffle with some close matches and a loss, but if he wrestles like I think he can, I think he can win another decision here.