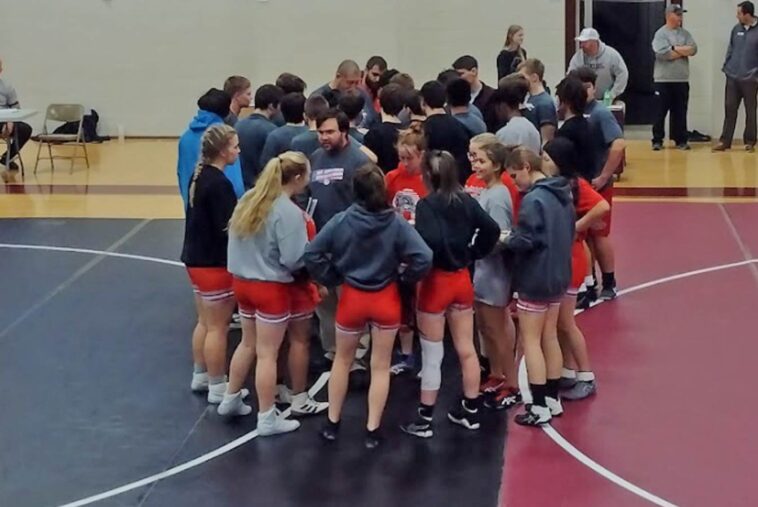 Another evening of travel for the Mexico Lady Bulldogs who just won two duals the night before in Hannibal were looking to add another three wins to their credit at the Osage Quad.  All three of these opponents (Southern Boone, Osage and Versailles) are District opponents.  The Lady Bulldogs have seen all of these opponents at tournaments before but most them had not faced any of them until this evening due to the way brackets have fallen.

Below are the results of the three dual meets Mexico took part in:

Round 3:  Mexico vs. Southern Boone; This dual did not take place.  Southern Boone brought their lady wrestlers to the event and they warmed up on the mats but elected not to wrestle against Mexico.  When talking with Coach Senor, he could offer no explanation as to why they chose to do this.

Matty Tolbert at 194 had faced her opponent from Versailles twice earlier this season and lost both times.  Apparently, it’s “third time’s the charm” for Tolbert.  The match was even with both of the ladies scoring points early on but the move that mentally broke her opponent was when Tolbert scored a takedown and turned her opponent on her back and scored a rare four-point nearfall because her opponent appeared to be injured while in pinning criteria.  The match would resume and Tolbert continued her dominance and would pin her opponent late in the third period. Another potential Disitrict Tournament matchup for Tolbert and now that there’s a rivalry established, it will be a fun match to watch.

Abbigale Drew at 125 lbs. would face a talented freshman from Versailles.    In the early going of the match it ws setup to be a barn burner with both ladies scoring takedowns, nearfalls, and/or reversals/escapes.  Drew would take a narrow lead into the second period.  She chose down and subsequently earned an escape, a takedown and then the fall, all in quick fashion.

**At the time the article was being written, the writer was informed by Coach Senor that St. Charles had cancelled their tournament for the weekend due to pending severe weather, which would give the Mexico Lady Bulldogs, the weekend off.**