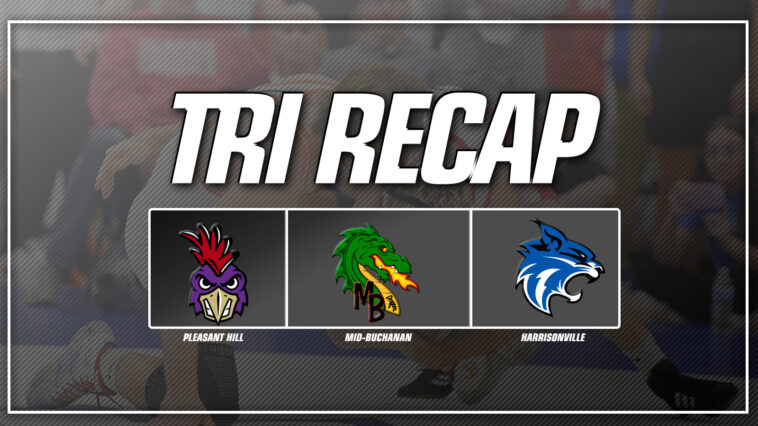 It’s not very often that the top two teams in the class two face off, but the Harrisonville Wildcats played host to a triangular that was worth much more than the price of admission. On Tuesday night, the number one ranked Pleasant Hill Roosters, and number two ranked Mid-Buchanan Dragons rolled into Harrisonville High School with high expectations to prove who would be the best in the state.

The hosts kicked things off against the Roosters and immediately found themselves in a hole with three open slots. Chris Sullivan got the Wildcats off the schneid with an early pin. The Roosters rebounded quickly, and strung together five straight wins from the heart of their lineup, four coming by way of pin, while Freshman Kyler Wallace-Riley won on a 25-14 major decision. The Wildcats took twelve more points off the Roosters, highlighted by a Kale Weber pin at 175 pounds. That however, would be the last the Wildcats would score, as they took six points each in their last three matches, with Jacob Hanes and Sam McDowell-Driskell, making quick work of the final two Wildcats. The Roosters won decisively 60-21.

While the hosts cleared the mat after a pretty straightforward dual, the Dragons took their place and raised the stakes tenfold. The Dragons have reigned supreme down in class one the past two years as they repeated as state champions in 2021 and 2022, making the jump up to class two this season, boasting an impressive lineup. Pleasant Hill Freshman Sam Jerabek started things off with a big 10-2 major decision win over Kris Whitford where he controlled the match, and his opponent to give the Roosters an early 4-0 lead.