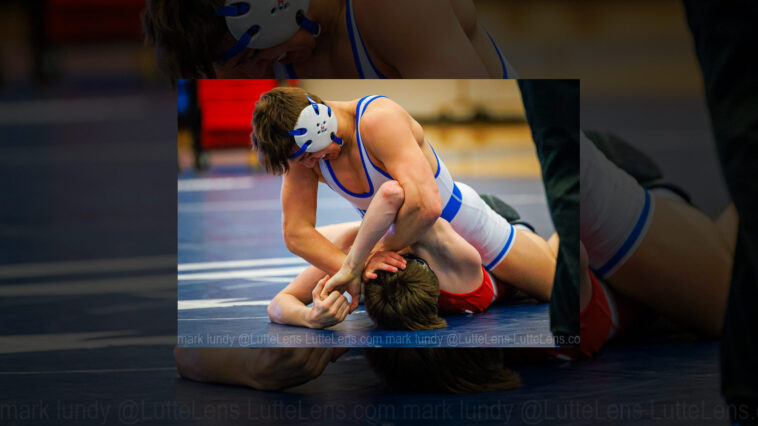 In a showdown of nationally ranked teams, Millard South (Nebraska) jumped ahead early but Liberty rallied by winning four matches in a row and never trailed on the way to a 33-20 win on Thursday, Dec. 30 at Liberty High School.

The No. 17-nationally ranked Blue Jays fell behind early to the visitors, 13-0. Millard South, ranked No. 45 in the nation. The Patriots opened with a 3-2 win by Tyler Antoniak over Logan Rathjen at 152 in a battle to highly-ranked wrestlers in their respective states. Antoniak, ranked No. 1 in Nebraska, got an escape to open the third and held on to be the No. 2-ranked Rathjen.

The Patriots also took head-to-head ranked battles at 170 and 182, which built the early 13-0 advantage. Nebraska pledge Antrell Taylor, ranked No. 7 in the nation at 170, beat Peyton Westpfahl 8-2. Westpfahl, ranked No. 3 at 160, was tied 2-2 after the second period before Taylor secured an early escape and later a takedown/nearfall combo that accounted for the final score. Caeden Olin, ranked No. 3 at 182, got a 4-3 win over Jeremiah Halter, ranked No. 5.

“We wanted to end with 145 (pounds) and we knew it would be a match of two nationally ranked kids but we knew they were strong right here and we would have to battle and we picked it up after the first couple of matches,” Liberty coach Dustin Brewer said. “Especially in duals it is easy to get down after you lose two or three in a row. Our guys came back and rallied and wrestled well for the rest of the duals.”