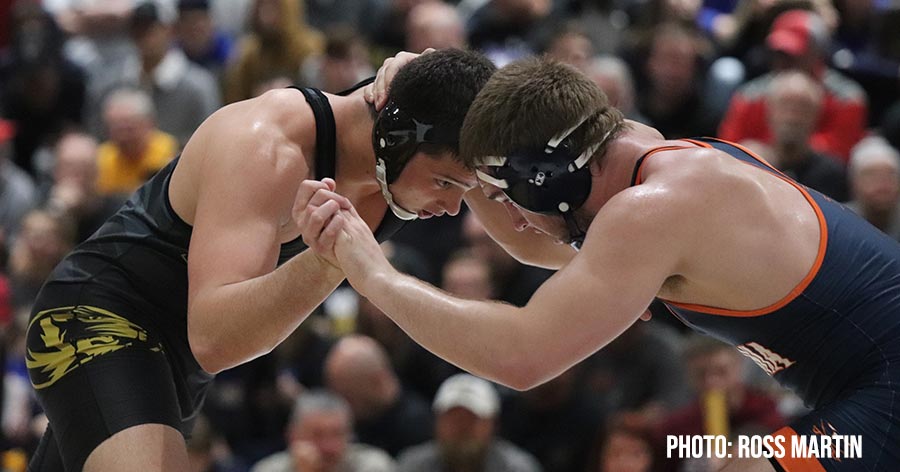 During my travels around the country this past fall, I was given the wonderful opportunity to return to Missouri and speak at Oak Park High School – both to the high school wrestlers, as well as the youth club “Greater Heights Wrestling”. While it was a rather quick visit, it was nevertheless very meaningful to me. Virtually nothing of Oak Park is how I left it almost twenty years ago – new faces, new leadership, new wrestling room. However, it was fascinating to return to a place that holds so many memories and a great deal of personal value.

One thing I noticed after speaking with the Greater Heights group is the motto engrained in the program: “embrace the climb.” Perhaps others can relate to a similar motto: “embrace the grind.” Their motto stuck out to me, in that it created a vivid picture in my mind. I could see these kids –metaphorically speaking – each climbing a tall mountain with a peak so high that it’s barely recognizable. So much so, that they, at times, question whether the peak is attainable or that the peak actually exists at all. But they’re all climbing the mountain together, encouraging one another to embrace the climb, to keep going.

There’s a common belief in the wrestling community that “all the hard work will pay off in the end.” I think this is often pictured as the wrestler, for instance, achieving the accolades they worked so hard for. And while this can be true, I think this belief is somewhat misguided and probably not the right message, at least as it pertains to this understanding of it. While some wrestlers achieve the accolades they sought after, some don’t. Yet both may have exerted the same amount of blood, sweat, and tears. Both may have embraced the climb fully and completely. But if the peak represents accolades (gold medals, etc.), then most wrestlers may never reach the peak. They’re still stuck on the mountain. And how can we confidently encourage them to continue embracing the climb?

Might I suggest that to embrace the climb does not necessarily mean the peak holds inevitable treasures of wrestling glory? Instead, the peak holds something else. That is, a better, stronger, courageous, and more resilient competitor and person, as well as an experience that can’t be measured. The peak is not a promise of accolades; the peak is a promise of value.

I often tell wrestlers that, despite how ridiculous it may sound, one day they will miss the climb. They will miss the pain and fatigue they experienced in the wrestling room. They will miss the blood, sweat, and tears. Why? Because, at some point, if they fully embrace wrestling, if they fully embrace the climb for all its worth, they will eventually realize that the sport delivered immeasurable value to their life; that, without it, they would be altogether different than the person they became. Now, I want to be careful and not push this point too much. For we all know that the sport isn’t perfect, that wrestlers are people, and that people don’t always turn out to be wonderful. But it seems to me that, when wrestlers do recognize the peak of the mountain as the immeasurable value of who they become and an experience that can’t be replicated, they do in fact turn out to be wonderful. Moreover, they realize that maybe the value wasn’t just discovered when they reached the peak…that maybe the value was in the climb…the value was in the blood, the sweat, the tears. The value was internalized long before they even reached the peak. In fact, once they reached the peak, once their time as a competitor ended, all they can think about now is how much they wish they could go back down to the bottom of that mountain and start climbing again.

This has been the experience for me, as well as countless others in the wrestling community. I don’t claim to be a man without mistakes or quarrels. But I promise you that I am a man who takes seriously the lessons learned while in the midst of the climb, and who often looks back on his life as a competitor on the mat in order to help inform him in how to approach the challenges of life. And yes, the value in doing so is immeasurable.